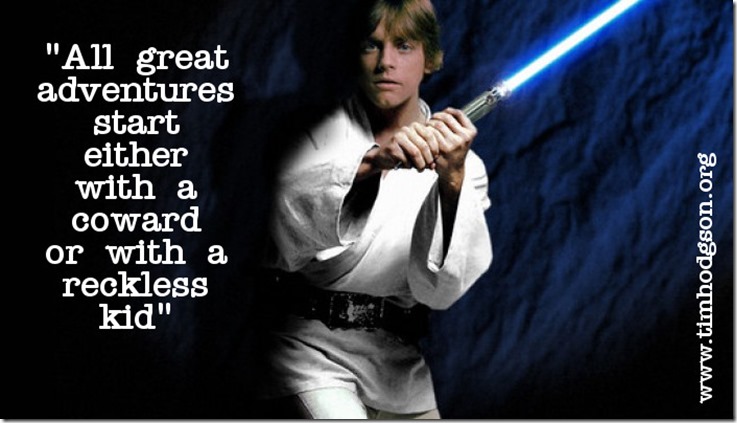 Hello again, and welcome to the second part of our adventure ‘Walking with Heroes’. This time we’re going to look at the Hero’s Journey – the timeless saga that underpins the great stories told around the world – and is also the heart of my story – and of yours, too.

When we look deeply into the structure of the great sagas, whether they be ancient stories like those of Jason and the Argonaut, or more up to date tales like Star Wars, Lord of the Rings, or Harry Potter we find a pattern. That pattern’s there not just because it’s good story telling – but because that’s the pattern of the story of our own lives, woven deep into the warp and woof of our own journey, our own saga.

The concept of the Hero’s Journey was identified by mythologist and author Joseph Campbell – he referred to it as the ‘monomyth’ and outlined it in his book ‘The Hero with a Thousand Faces’. Campbell believed that the monomyth was the great underlying spiritual story of mankind, and that’s why we find so many echoes of it in storytelling around the world. The story then embodies what’s at the core of our lives… that this is, in essence, a spiritual journey.

When we start to realise that our lives are not just aimless wanderings from birth to death, through highs and lows, peaks and troughs, through the ordinary and mundane to the sublime and wonderful – when we realise that each one of us is part of a bigger story, the story told from before time – then suddenly each one of us can know that we are living a life of significance, that our individual contribution is important. We are not here by chance – we are here because we matter, and because our lives matter.

The meaning of myth

In Campbell’s work, story and mythology have four functions:

To awaken a sense of awe before the mystery of being – because deep truth cannot be explained in words or images, story that awakens the soul allows us to connect to the deeper hidden mysteries.

To explain the shape of the universe – to find a way to explain the infinitely complex in patterns and in analogies that can be grasped by humanity, and to reconcile the scientific with the spiritual.

To validate the existing social order – to preserve the constructs of society and the values and morals of civilisation.

To guide the individual through the stages of life – to provide a framework for each of us to use as we step through our own individual journeys.

I’m going to focus on this last role, because it helps us to understand our lives, creating a cosmic context for our experience, making sense of what may feel like a random and chaotic journey.

Each of us will have had a moment when we identified with a character in a story. That might be with the despair of Cinderella when she is left behind, unable to join in the merriment and excitement at the ball – until, that is, until magic arrives in the shape of the fairy godmother and transforms bleak despair into hope and joy. That might be with the youthful Luke Skywalker, left alone on the desert world of Tattooine – until, that is, a chance encounter with a mysterious old man leads him into an adventure that spans the galaxy.

That identification is no coincidence. The echo of the story calls to each one of us, calling us to believe in something greater, something that will give our life meaning. We may believe that we are stuck somewhere in our story – but the truth is that we are not – that we can choose to write our own ending and create life as we want it to be. We are both the hero and the storyteller – the protagonist and the voiceover, and we can choose our own adventure and our own storyline.

In the mid 1980s Chris Vogler, a story consultant for Disney, became fascinated by the concepts of the hero’s journey, particularly as he saw the themes of the story laid out in the movie ‘Star Wars’. He wrote a seven page memo to the Disney executives explaining how he saw the mythic themes presented in the Star Wars storyline. Yet this mythic framework echoes back many long years – way back to before Hollywood, before Tolstoy, Dickens, Homer, before the authors of the Bible – way back to when stories were told around the camp fires by the wise men of the village, where stories became the way that culture and tradition was passed down from one generation to another – but also where hope, and meaning, values and ambition were woven into something much richer.

I can remember watching the ground breaking movie ‘The Matrix’ in an American cinema. I had no idea of the storyline or the concept, and yet suddenly my understanding of the world was turned upside down as the screenwriters forced me to question the very nature of reality. Many of those concepts are now embedded into our understanding of how truly ‘real’ this world is, and how much of it is an illusion.

Stages of the Journey

And yet, that’s the story teller’s secret – to leave his audience waiting for the next chapter to unfold.