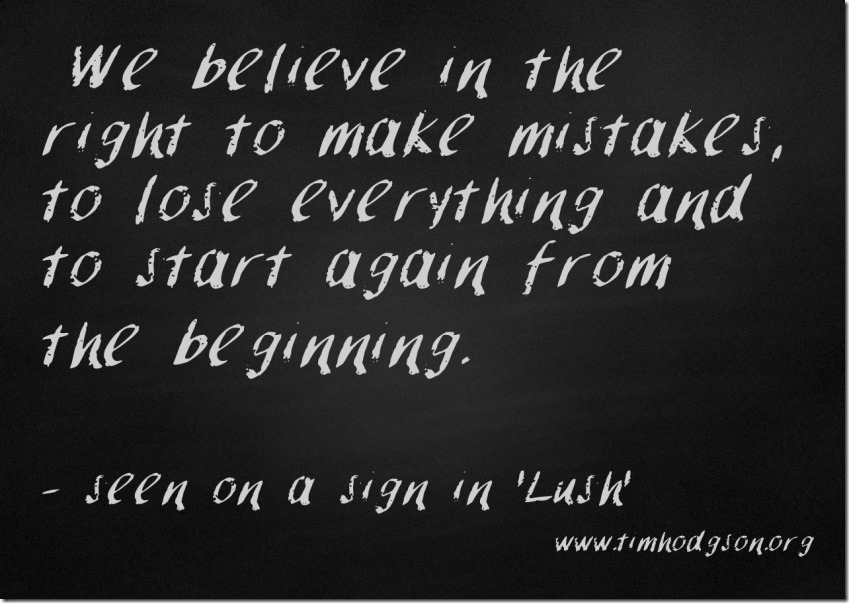 So welcome to week 4 of ‘Walking with Heroes’. I hope you’re seeing some of the parallels starting to emerge in your own life as well as starting to see the themes and stories that are woven into literature, into the movies and TV shows we watch, even into songs and into fairy tales, into books and comics and more.

Next time we’re going to start looking at the characters that make up these stories – the people that we can find on our journey through life – and the people that we are and the stories that we retell through our own lives. But for now… a little more on the story.

Now, you may well be thinking ‘I live a dull boring life in suburbia – all these stories of adventures and epic heroics are nothing to do with me’. I’m not so sure.

For some of us, we are already on that journey. We’ve recognised the call to do something great with our lives. Something, somewhere has called to us and we’ve answered. That might be a call to create – perhaps to build a business or an organisation. You will have been just going through life, going through the motions – when suddenly (or not so suddenly) an idea occurs to you and a vision begins to emerge. You might well have met someone wiser than us who can mentor us – or be thrilled by the success stories of others who have gone before us. You’re on the journey.

Perhaps yours is a great romantic adventure – the call is the call to love, to care for someone. That in itself is heroic. There will be someone that you respect who will offer you wisdom – or you will model your love after someone else. There will (you know there will) be trials and tests, hard times and difficulties. There will be friends and companions to support you. There will be a ‘dark night of the soul’ for you where you weep and despair. And you will emerge from the tough times with a new strength, a new capacity to care, a new determination. And there will be something that tries to drag you back to old fears just as you are stepping out of them.

Perhaps you will find your journey in parenthood. You find yourself thrust into a new and scary journey where everything is mysterious and difficult. There will be those around you who support you – and sometimes you will feel that the world (and your children) is set against you. Again, you emerge from the journey transformed – deeper, wiser, more caring, more powerful.

You might have a vision to do something of service to others: to start some crazy global initiative that will change the planet, or something local that will benefit the local community. That vision will take you through tough times when all seems dark. It will force you to confront your own weaknesses and the weaknesses of others. You will have to fight against unexpected obstacles. Yet you will give birth to something in all of that which makes a difference – which is a gift to you and to the world.

You might not yet be on the journey… yet perhaps there is something that calls to you, some change that you know you need to make, some great initiative that you find yourself returning to time and again. You see, I know that each one of us is called to be a hero, to achieve something amazing and wonderful in this life. That might be a huge initiative on the world’s stage, or it might be something smaller, something closer to home… but the seeds of greatness are in each one of us. That call may be loud and obvious, or it may be quiet and subtle.. yet it calls to each one of us, if we let it.

I know I’ve been on this journey several times – but perhaps the most recent for me was when I decided to leave my nice safe well paid job to create a business that served people rather than technology. The call for me came in several ways: from those around me, from those I respected – both international leaders and teachers and those closer to home. It was definitely an adventure that I stepped into and chose for myself.

I learned lots on that journey – through several mentors who pointed the way, and through friends that I met on the way.

The dragon I confronted was that of personal failure.. without going into it too deeply, the business didn’t work out as I wanted it to, largely because I was thinking too small, and I found myself confronted with deep feelings of inadequacy, a sense that I had been abandoned – by those around me, by those who had the opportunity to help me, and, in the end, by God. I definitely experienced that ‘dark night of the soul’ as I walked by the river trying to work out how to move forward.

Yet I did discover new meaning and new truth in all of that – the journey grew bigger as I took time out to travel, and that became the gift, the reward – yet I knew in all of that that I was bringing something out from that experience that would benefit others – allowing me to return to the ordinary world with a gift to give… which is why I am creating this programme and others to share what I’ve learned.

Now, particularly when things go wrong, we can find ourselves stuck in our own story. Somewhere along the route, our experience has left us unable to move forward, for whatever reason – and I often see this with people who are stuck and unable to move on.

For example, they might be running a story of unrequited love – there is something tragically heroic about someone who loves and yet ultimately fails to find happiness – the stories of Romeo and Juliet, for example, or the plots of any one of a hundred romantic movies where the guy fails to get his girl…or the girl fails to get her guy. If we’re stuck in that story, we’ll find ourselves continually in relationships that don’t fulfill us, or in love affairs where the love isn’t returned – because to us, that story is heroic, and we keep retelling the story with ourselves as the main character.

Or maybe we’re stuck in a story of success against all the odds – where we keep fighting setback after difficulty after disaster in pursuit of our goals. Every time we clear one obstacle out of the way, another dragon rears its ugly head. We’re locked in the drama of the story, knowing that if we were actually successful, then all the drama would go away.

(In a later part of this series, I’m going to take another look at some of the stories that shape our lives… but before that we’re going to need to meet some of the characters that we’ll encounter on the journey)

‘But what do I do if I’m stuck in the story?’, you might well ask. ‘What is it that I can do to escape this story that keeps retelling itself?’ Well, the first thing to do is to recognise that it is only a story. The only reason it exists is because you keep retelling it. We’re so vulnerable to the things we tell ourselves..’I’m too old’, ‘I’m never going to meet anyone’, ‘every time I try something new I fail’, ‘I guess I’m just plain unlucky’, ‘I’ll never get out of debt’. We keep telling ourselves these things… and yet what if they weren’t true? What if they are just things we say to keep us in the drama of life?

The only time we have is right now. The only thing that we can affect is what’s happening right now. The past is a memory, and the future is just a possibility. Neither of those things actually have any meaning right now – unless we decide that they do. I used to have a real fear of speaking in public after a minister (who should have known better) stood and ranted at me after I had taken a service in his church. I could choose to believe his comments – or I could choose to move on.

In the same way, I found myself continually stepping back to a situation that hadn’t worked out… and so I wrote a new story. I created a whole new adventure for myself – I set it in a time of knights and princesses, and chose to create a story where I travelled the world (for sure) and found a new purpose and destiny. Writing that story broke me free from the old ‘stuck’ story that I was in the middle of. Try it – it might work really well for you. (It’s actually a really good visualisation tool anyway, even for those of us who aren’t ‘stuck’ – write a screenplay of your perfect day when you achieve a goal, or when you are living the life of your dreams. Write it in detail – what are you doing, who’s there with you, what’s life like, what are you eating or drinking, where are you… every single detail.) Creating such a strong image will do two things – it’ll create something that draws you to make that true, and at a metaphysical level it will start to attract the situations and resources that will make that dream real.

We really can just drop the story. Take the lesson, learn what needs to be learned, then (and it really is this simple) move on. The only thing that stops us is when we have something invested in a decision not to move on – when it actually serves us to stay stuck. Perhaps it feels safer to stay single rather than move into a new relationship with the risks that brings. Perhaps it feels safer to say ‘I could have been great’ rather than writing that story, or singing that song – rather than creating that business, or going on that trip round the world. When would now be a good time to decide to turn the page and write a new story? Because, and you can trust me on this… there is a story that needs you to write it. There is a story that will make your heart sing, that will thrill you, excite you that will make you say ‘that’s why I am alive’. If you step into it. That story will call to you. Receive it. Take hold of it. Own it. Because it’s the reason you are here.

Stories are all around us. We create them and weave them, and we’re influenced by them all the time. We can use them as frameworks to create our lives, to inspire us and lead us onward…but we should never let them ensnare us and hold us back…

PS – If you missed any of the preceding parts of the programme – catch up here: PREVIOUS CHAPTERS